Previously I mentioned my Blood Angels army, which in fact is a successor chapter called the Solitudors. The name is taken from the Latin for isolation - solitudo, but since this also means to desert (i.e. to abandon), I opted for a desert (as in sand) theme. I'm rolling around some ideas for a backstory at the moment and at some point I'll write down, (maybe for Astronomicon next year?) so it should make more sense how the colours and theme fit together. Right now it's something like red sun over yellow sand give rises to the red torso and arms with yellow legs.

This was the first figure I painted in this scheme, with completely solid yellow legs: 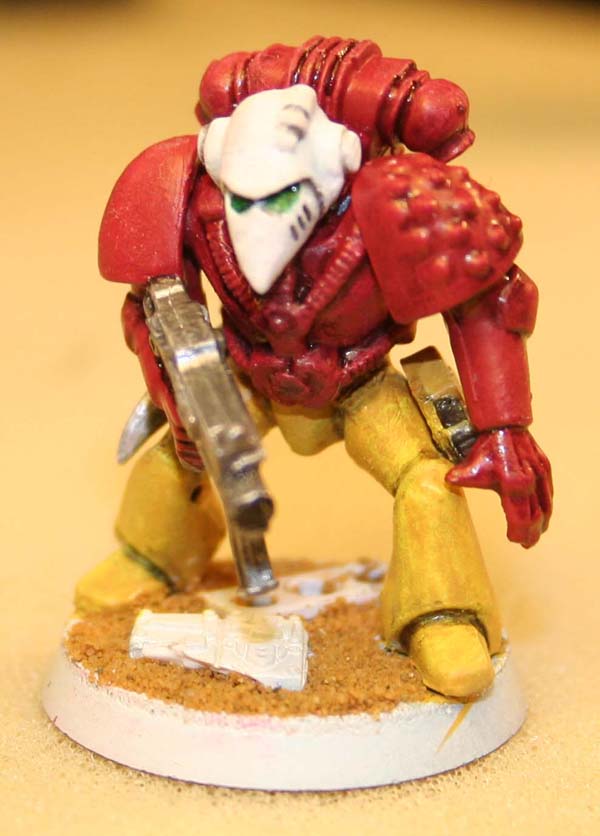 But I've now moved on to only having the yellow on the thighs, shins and feet. I've repainted this figure to match, and since thise photo was taken, I've completed the base.

The current scheme is shown on this work in progress shot of a devastator: I've made custom decals for some fo the marines, plus had custom pads made for others, these will be the subject of a future article.
Posted by Sir Tainly at 21:03 No comments:

Ever since I read the first Gaunt's Ghost books I've wanted to model the Blood Pact. At the time I had just started my first army, IG, after a 15 year break from the hobby and I wasn't in a position to start anything else. Things have moved on now, I've built (and mostly painted) my DE army and I've stock-piled a great number of figures and kits for future projects, one of which is the aforementioned traitors.

Right now I just have a load of guard sprues and toy tanks, with suitable heads in the post (Secret Weapon and Maxmini), so this is just an introduction to what I'm using for each of the signature Pact items.

-Regular troops are a mix of Cadians, Catachans, Chaos Marauders with Maxmini heads - This is more of a unit of cultists than true BP troops.

- N20 Halftrack, these 1/32 M3 half-tracks with a Chimera/Hellhound/Hydra turret as appropriate.

- AT-70 Reaver will be one of these Pz.III toys with lots of detailing and a Kromlech turret (just as soon as they release one with something other than a plasma style cannon). - AT-83 Brigand will be built from this very large Sherman (1/32?) and fitted with a dozer blade and a large bore cannon. - U90 Usurper, Chimera tracks with a scratch built hull I expect.

- Stalk tanks - still under investigation, but there's a guy in Italy who custom builds some very nice ones.

More information as I move this project forward, but right now it's behind my scenery and Blood Angel successor army, which will be the subject of future blog articles.
Posted by Sir Tainly at 21:15 No comments:

Objectives are often something that gets left to the end of an army build, and are consequently rushed just to get them ready for a tournament. This leads to bases with numbers painted on, or just an icon glued on or similar, but this is missing a chance to be quite creative. I've seen some really good modelling done as objectives over the years - crashed jetbikes, lost Ratling snipers, statues of Ghazghul etc, but it's also a chance to incorporate a different aspect of your army into each objective.

For my Dark Eldar army I have the following: a monster which has either escaped from, or is destined for the arenas a evil looking portal - a route to a disconnected part of the webway, or a backdoor to a rival's realm? I've tried in each of them to take one aspect of the Dark Eldar's depravity and make a marker for it. The final objective, which is a 60mm one will be a crashed jetbike with a wych carrying a stolen item - the raiders must retake this stolen item to take it back to their shadowy city.

I'm working on some other items for my other armies:

For my Orks I have a scrap pile (for lootin') I actually made a couple of these to double as scrap markers in GorkaMorka. Most of the items are miscasts from Zinge Industries, he likes to give them out for us to convert! For any Imperial forces I have this statue of a terminator. I bought the green-stuffed figure in a bulk buy on Craigslist, and while it's very well done, some botched repairs by a previous owner make it look a bit too rough to use as a figure in my army. Mounted on an Orangina top on a 60mm base he makes an excellent statue though. I also have a missing sniper objective under construction - photos when it's a bit further along.

I should also say an excellent source of 40mm based for objectives, or indeed any figure, is the humble poker chip. It's dead on, or close to if you get the knock-off ones, for a GW base.

In closing, please no more numbered 25mm bases - go out and make something visually interesting, and themed to the army you're playing!
Posted by Sir Tainly at 21:49 No comments: